The Science & History Behind HIFU

For decades ultrasound has been used as a diagnostic tool to help determine size, shape and consistency of various internal structures. It has also been used for monitoring pregnancies, and with varying success to break kidney stones. However, using ultrasound for cosmetic procedures is a new and fascinating development.

The history of this exciting new development began over 14 years ago after a partnership between both Ulthera and Johnson & Johnson, to develop micro-focus ultrasound for non-invasive treatment for liver cancer. In 2004 Ulthera was established to further develop the technology for the aesthetic space, and after two years of extensive pre-clinical research, Ulthera conducted three clinical studies to evaluate safety and efficacy of the technology. One of the studies, an efficacy studies at North-western University in 2007, demonstrated a clinically significant brow lift and 89% of the patients treated and led to Ulthera’s first FDA indication.

They are, without a doubt, the leading innovators of ultrasound technology for medical and aesthetic applications. After several years of pre-clinical evaluation of clinical studies, Ulthera received the first FDA (food and drug administration) clearance for a non-invasive lift indication in 2009, and they approved the ultrasound device called the Ulthera Ultrasound system, designed for skin tightening treatment of the face. In 2012, the system received an FDA indication for visualisation of dermal and submental tissue layers.

Most recently, the system received its 4th FDA indication of June 2014 for improvement of lines and wrinkles on the décollete. Since then, they’ve increased with over 450,000 commercial procedures profound worldwide.

Diagram 1 is of younger skin and ageing skin, showing the decrease in collagen and broken elastin in older skin.

Diagram 2 highlights that HIFU treatments reach the same depths that surgeons operate to. 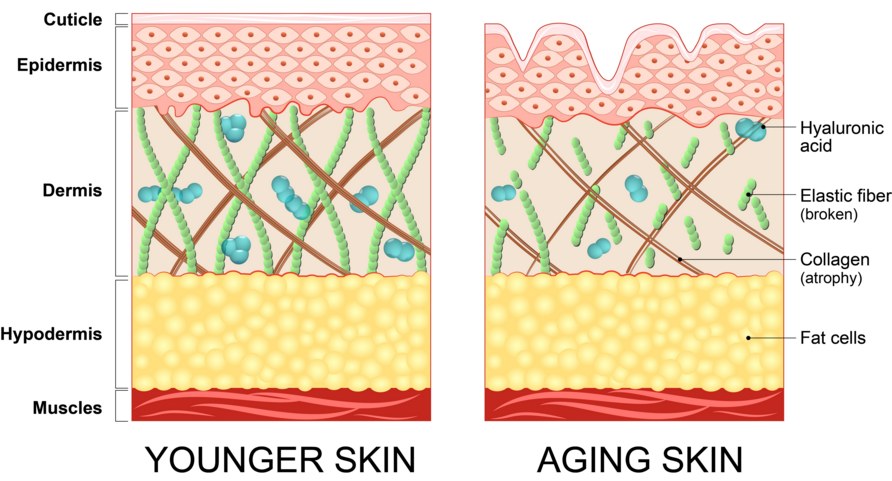 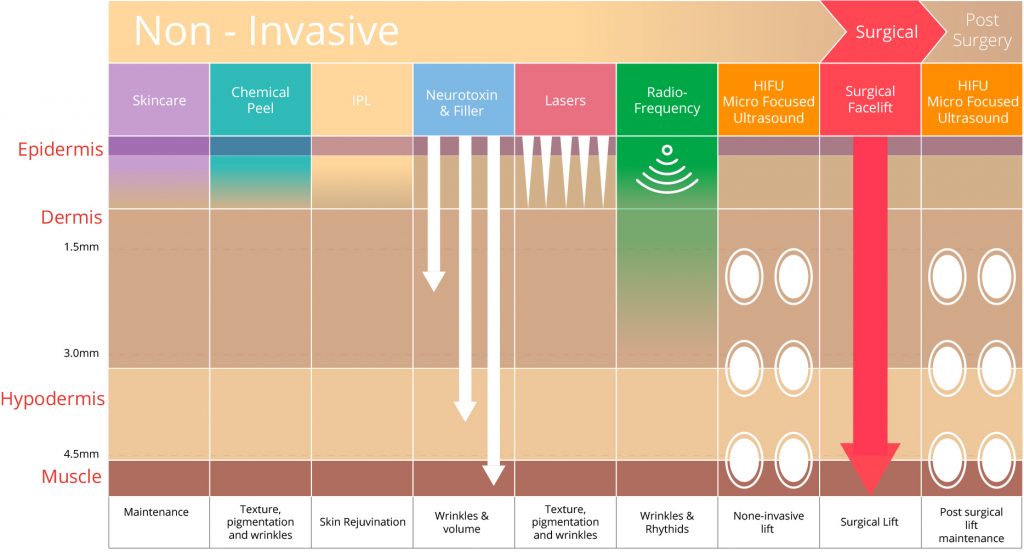 The History of Skin Micro Needling:

The very first study concerning skin needling was published by Dr Andrea Camirand et al, who in his 1997 article describes his experience with this technique. In an effort to camouflaging and hide facial hypochromic scars in several of his patients, he resorted to tattooing over the scars with the skin coloured pigment. After a couple of years, it was apparent the skin coloured pigment was gone, it had been replaced by actual Melanin, while the scars themselves had dramatically improved in appearance, tone, texture and colour.

Following Dr Camirand’s development, Dr Des Fernandes introduced his own needling device, a small needle stamp that he regularly used in his surgical practice to induce and stimulate collagen production. He delivered his first paper on skin needling of the upper lips at the ISAPS Congress in Taipei in 1996.

Development of the micro needling device:

After extensive research and further development of skin micro needling technology, Clinical Resolution Laboratory, a US company from California, created a device called MTS Roller and released the instrument to the general public in 2004.

After comparing the two above mentioned techniques with the MTS roller, it is evident that the MTS roller combines the best features of both, while offering additional advantages. As the MTS roller is passed over the skin, it creates hundreds of temporary holes in the epidermis (the top layer of the skin), as well as hundreds of minuscule wounds on the dermis. This starts up and an aseptic inflammation process, which then will result in collagen production. The number of punctures caused by the MTS roller is dozens of times greater than the number of punctures created by tattoo gun or any previously used method.

Over the last two decades this process has brought about numerous research papers by the world’s leading universities medical departments. Studies conducted at University of Naples, Asian Journal of Aesthetic Medicine and Phillips-University at Marburg (the world’s oldest university), they all confirmed the amazing results that have been achieved with CIT.

We at Skin Rejuvenation Clinic believe that it is vital that we take the proper steps to create a warm and welcoming environment for you upon your return. Our service safety will always be at the forefront of our best practices.

During this Unprecedented time, we have enhanced our cleaning procedures by completely sanitising all areas and equipment used by the clients in-between all appointment. We are also taking a reduced number of clients daily. The practitioner will be in full PPE at all times.

Please inform the clinic of any known symptoms/illness that may cause concern well before your appointment. Upon early arrival before your allocated time, please wait in your car and message the clinic before entry as not more than one client is allowed at a time. We would appreciate if the following Covid-19 rules could be followed:

> Hand sanitiser will be available

> A temperature check will be taken

If there are any questions about the operations of the clinic during Covid-19 then please feel free to contact us at: